Predictable No More: Automated Energy Trading Comes Into Its Own

Everyone knows that renewable energy sources are an indelible part of the energy landscape, with its rapid rise and demand shaping energy markets for the future. However, the impact of the renewables megatrend is obscured when it comes to the operations of energy companies.

Our recent webinar on Automated Energy Trading positions the implications of renewable sources front and centre. That is, the renewables megatrend sweeps away a decades-long energy system with predictable and controllable energy production. Many condensing and CHP power plants have been decommissioned in recent years, but those plants were able to adjust their production when needed. Hydro power still has a significant balancing role, especially in the Nordics, but there are very few new investments in power plants with significant flexibility. At the same time, more coal-fired power plants have been shut down in Central Europe. The growth of weather-dependent renewable energy production requires a significant amount of balancing due to deviations in forecasting errors when it comes to power generation.

In particular, the forecasting of wind-power generation is challenging in its very nature and forecast deviations can be significant. For example, based on data from Entso-E, on the afternoon of July 10th, actual wind power generation in Germany was over 9,000 megawatts greater than forecasted the day before, leading to a significant imbalance in volume to be traded in intraday market (see chart below). Forecast deviation wind power in Germany was greater than the total electricity consumption in Finland, and about three times greater than total consumption in all the Baltic countries put together. Let that sink in. 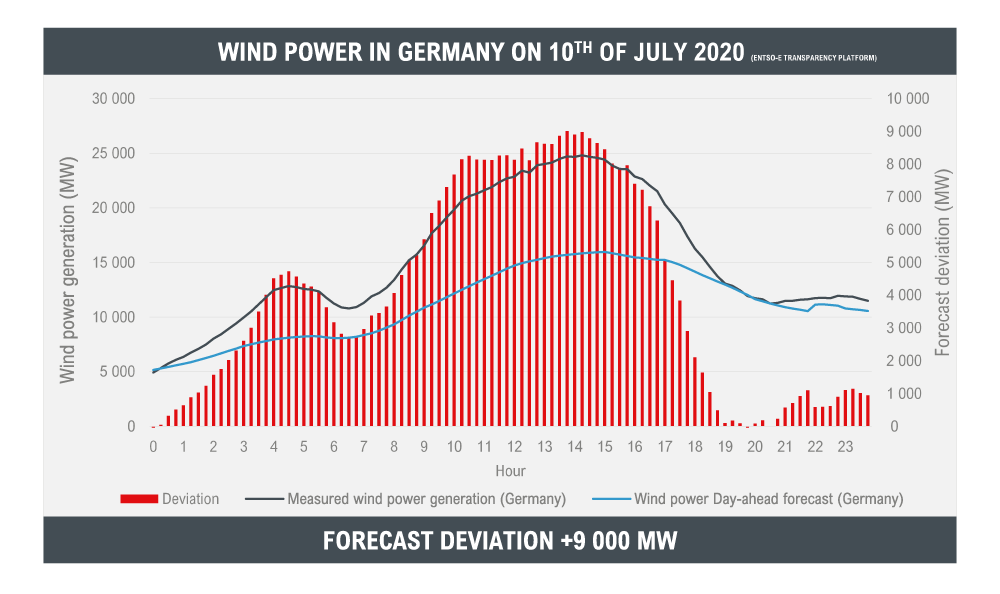 This much is clear: the growth of renewable energy generation has just started and the trend will continue far into the future, impacting energy markets and trading. Intraday trading volumes will continue increasing and, when flexibility on consumption or on the production side does not increase as fast as the need for flexibility, the outcome is increased price volatility. When the market moves faster than ever and price volatility continues growth, manual trading will inevitably be phased out. Trading desks need to be automated, not out of a drive to become more efficient, but simply to work in the marketplace without losing out.

This move to automation in trading is happening, as shown from Nord Pool’s tracking of automation since early 2018 (see chart below). There’s been a jump to nearly 60 per cent from 15 per cent in a span of roughly two years.

What then is stopping the jump to automation for that minority of energy companies? As I work with companies directly on these issues, I have observed that it’s mainly a question of priorities – the project to make the switch to automated trading is important, but there may be other competing priorities that take precedence. There’s a willingness to “just get by” with manual trading. And, practically speaking, there needs to be a mindset in the company that automated trading is safe and can actually execute the business strategy of the company – two points of skepticism that were really prevalent as the possibility of automated trading became real.

Our webinar goes further in-depth on what automated trading looks like and the practical advice of how to get started on the path of automate trading. I strongly recommend you watch it if your business is starting to consider this.

I believe that the ongoing shift to renewables – and its consequences on energy trading – means that automation in the operations of energy company is not merely a ‘nice-to-have’. It’s a must. And many companies have shown that taking this step will allow them to compete and bring benefits to their operations, while pursuing their core business strategy.

NEXT UP FOR YOU