Dealer App: A Proof of Concept

In my previous blog, I talked about the rise of cross-platform frameworks and their benefits. Building on our learnings, we decided to create a Dealer App as a POC (Proof of Concept).

The main purpose of this app is to sign up and service customers of a specific dealer and handle installations. The service aspect may include taking customer payments and posting to their accounts.

Dealers use various platforms: if there is a store, the app may be run on a desktop or a tablet. Smaller dealers and installers that may not have an outlet could use a tablet or a smartphone. And in developing markets particularly, the phone is prevalent.

We started by creating a dealer web application using Angular. Although Flutter has state-of-the-art capability for cross-platform mobile development, the web capability has not yet matured to the point where it rivals Angular or React. When the web is the only target and there is no mobile requirement, Angular or React will be better choices.

Although the creation of a web application had many advantages, it had one major drawback: it is not optimised for the phone. The use of responsive and material design allowed the application to run in the browser, but we could not take advantage of the phone’s capabilities and inherent usability as a native app would. For example, we could not use the GPS or camera features.

We created a new app using Flutter/Dart. Leveraging many of our existing UX patterns, development frameworks and components (like GraphQL) helped reduce development time. The Flutter framework provided us a single code base for all platforms, like iOS, Android and web.

Although the application has a single code base, we gave special consideration to layout and widget types based on the platform and device size: 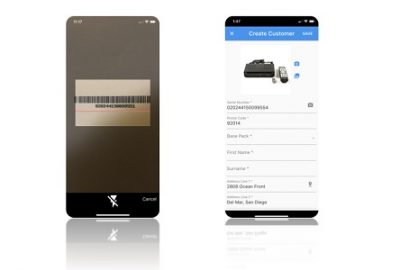 Our mobile app uses several native phone capabilities. We implemented a bar-code scanner to register set top box serial numbers; used the GPS functionality and address lookup to automatically fill in the customer address; and used the camera to support in-app photos of documents and completed installations. All those features speed up the order-capture process and prevent manual entry errors.

The Dealer app is a lot more versatile than the Web version, and provides many benefits:

There are a few one-time cons that can be resolved over time:

The use of Flutter and similar frameworks allows for a single code base across various platforms. This makes it feasible to build an app and website with maintenance cost that are like a web-only approach.

Although Flutter’s web capabilities are not yet on par with the likes of Angular, we foresee a steady progression of the framework with increasing support for web. Given that many users prefer native mobile applications and the added capabilities of the phone, it makes sense to build dealer portal applications in Flutter instead of web-only.

In order to benefit even further from Flutter’s productivity benefits, one can think of a re-usable Hansen App Development SDK (similar in concept to the ICX Expansion Pack) created using Flutter and Dart’s powerful package management and modular abstraction capabilities. This was outside the scope of the POC, but we can imagine that it covers some generic elements:

The POC proved to us that the Flutter/Omni-platform solution is the route to go.

NEXT UP FOR YOU